I was going to write about something happy and affectionate today, like a girl on a pegasus with a muffin or something. Instead I have this: 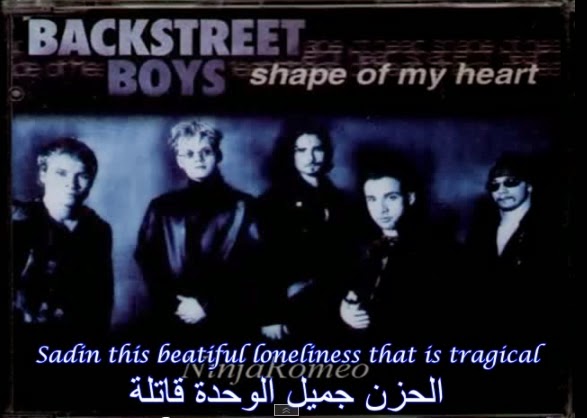 1. SHAPE OF MY HEART

At one point in the song, AJ sings: "Sadness is beautiful. Loneliness is tragical."

"Tragic" is what English speakers say, for example, when they refer to the Backstreet Boys' fluency with English.

Maybe their powers of vocabulary were distracted by the blonde gal in the video, who apparently is about to go down on Nick under the table. But more likely it's just that the Backstreet Boys could not speak English to save their goddamn lives.

It's not super-hard to match the subject and verb here. Men STRIKE, Man STRIKES. Men do not strikes. I think possibly Kevin was born in a foreign land.

This concert was also notable for BSB's duet (uh, sextet?) with Sting, doing "Don't Stand So Close To Me." Yes that is a really awesome idea.

3. DOES HIS GIFTS COME FROM THE HEART? DOES HIS FRIENDS GET ALL YOUR TIME?

Strangely, "DO his gifts come from the heart" would also fit the meter, and also be correct English.

We get it, guys. You are so backstreet that you even speak English all street-like. Your love is all you have to give. You certainly cannot give lessons in English.

5. SHOW ME THE MEANING OF BEING LONELY

Duh. They're asking because they really don't know what is the meaning of the word "lonely." Because the Backstreet Boys don't know how to speak goddamn English.

Also, remember when this was the most popular video in the universe? There are kids out there right now probably still learning English from those Backstreet Chumps. And that is truly tragical.