Well it's been about, what, eight episodes since we had a gratuitous shower scene, hasn't it? So we're totally due. Marlene and Rook and Annie all share a sauna after Annie's birthday party. Rand peeps at them. It's very "Porky's."

I had this memory that Lancer also joined them in the shower, in all his naked hairless hermaphroditic glory, but thankfully that weirdness didn't actually happen.

I like to think that Annie's "ET" cap stands for something, like "Extra-Terrestrial" or "Entertainment Tonight." Or "Eternal Tourist."

This one also features the first listen at Yellow Dancer's cover of "We Will Win" accompanied with what I believe was a popular anime motif of the period: slow motion sepia-toned photos of the characters set to yearbooky sentimental music. What? It's Japanese. You know someone was taking pictures of the whole thing.
at October 26, 2009 No comments:

This is it. The last VHS tape in my inherited collection. Apparently we skipped across a few episodes to arrive at ep 79: I did search the previous tape carefully, but found only a Bikini Model Competition from some midwestern state (which was clearly being taped over, just to be clear.)

This is The One Where They Discover Denver and Eat Vienna Sausages.

Scott goes shoe-shopping with Marlene, which means he's really in it for the long haul.

Not so much of note here except that it is another one of those hella romantic post-armageddon fantasies: After the fall of humankind, you can go hang out in a deserted Denver and walk the streets and just take whatever shit you want.
at October 26, 2009 1 comment: 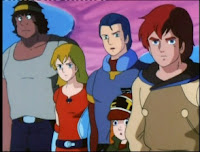 The great thing about anime is there is no Jumping the Shark. Anime has no sense of normal or acceptable boundaries. The Shark can be Jumped in every single episode, or several times in one episode. In anime, major characters can die, people turn into pigs, they switch universes using a magic chunk of tofu, it's All Good.

So in this one the gang meets some kind of jungle tribe that ties them up with thorny ropes and then one of them tries to marry Annie. Well first he tries to marry Lancer by throwing him into a gunny sack. And then Annie takes pity on him (he's named MacGruder, for some reason) because he's such a noob and tries to seduce him with flowers in her hair, and then shock troopers show up and the tribe tries to fight them with arrows and tomahawks, and Lancer swings on a vine, and....oh hell, I'm just gonna take a nap.
at October 22, 2009 No comments:

Email ThisBlogThis!Share to TwitterShare to FacebookShare to Pinterest
Labels: liveblog, robotech, Robotech series liveblog
priceless bit of dialog from that episode, as the team argues:

ROOK: Oh c'mon you two. I know what, Lancer, sing us something!
LANCER: You think you can just turn me on and off like a music box?
at October 22, 2009 No comments:

WHAT is THIS shit? Rand's on a DRAGON.

I've never been a fan of the dream sequence episodes. I mean do we really need to know that Rand has hero delusions and subconscious lusty fantasies for the nigh-obnoxiously lithe females in his freedom fighter crew? Isn't the whole anime series already an extension of those fantasies for the creators? I just don't think we get much more information here.

Plus, I don't really need any insights into what the Invid eat, or how they breed, or whatever. That backstory is superfluous. They're heavily-armed slug creatures who came to Earth to conquer the crap out of it and use all its natural resources. It's not like that's such a foreign concept to anyone who's been alive in the last two thousand years.
at October 21, 2009 No comments:

Rand and Annie attack an Invid hive on skis.

Scott: "If only they weren't so undependable! I'd know if they were in serious trouble or just goofing around!"

Annie, of her cobalt limpet mine: "Hey, I carried it, I think I should be the one to plant it!'

Annie falls down and needs to be saved by Rand like four times, but she does plant the shit out of that mine. It explodes the brain-sensor thing into a cloud of protoplasm that floats around and then slimes our two heroes.

Rand, upon being released: "I've had it and I'm gonna slaughter those animated trash compactors!"

Nothing really awesome happens in this ep except for some cool dogfighting....until the end, when we have a gratuitous scene of Annie and Rook splashing around in a lake and Marlene stripping nekkid to join them, cause she "doesn't understand human ways." If I had a nickel for every time I've heard that.
at October 19, 2009 1 comment:

OK, this ep is fascinating.

Lancer meets an old flame, and stares deeply into her eyes...while dressed as Yellow Dancer.

We learn the origin of Lancer's cross-dressing, which had something to do with eluding Invid who were coming for wounded male freedom fighters. His old flame came up with the idea of throwing him in the makeup and the dress. How often does THAT happen?

Yellow puts on a really cool Marlene Dietrich-esque outfit and introduces a song as "an old Minmay song," although the song they play is "Look Up The Sky Is Falling." Imagine a fact even LESS cool to know than the fact that one of the songs in "Boogie Nights" is from "Transformers: The Movie." That's what I just wrote.

But the fascinating part is the whole ep concerns a secret route through the mountains which is fraught with much Invid peril...and I like to think, a metaphor for the unparalleled transformation of Lancer to Yellow Dancer and his own "secret passage" towards gender re-identification and his public/secret life as a pop enigma.

Also, they play all 3 big Yellow Dancer songs in this ep. There's a great audio cut to the guitar solo in "Lonely Soldier Boy" as Carla is leaving Yellow, the tranny rock star that she inadvertently created. It's sort of like the "Up Where We Belong" moment from the end of "Officer and a Gentleman," except much, much, much more weirder and Japanese. 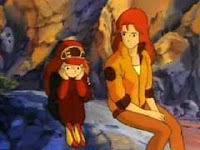 you darn tootin, she enters.

(How did kids play with the Rambo toys? What were his missions? How did he act as a "Force of Freedom?" Did he always start off captured, or on the run from the U.S. Govt? My point here is that Rambo's opponent was everybody, including mostly all military leaders and representatives of all armed forces in every nation he got dropped in. If Rambo saw the G.I. Joe team, he'd probably find a reason to fight them. And I guess that would be awesome.)

They also find the BETA FIGHTER! Which, as discussed below, is basically the Alpha Fighter's knobby bitch.

Not really feeling this ep. In kind of a bad mood. Marlene's screaming freakouts ain't helping any. The problem with Marlene is that just as the gang was starting to cohere as a team, here comes the moody alien spy-girl who's gonna be mysterious and awkward and need all the attention, and constantly get it by being naked at inappropriate times. I guess she's a necessary character to give Scott something to do besides launch 196 cluster missiles at everything he sees. I just don't remember liking her.
at October 08, 2009 2 comments:

I just think it's cute that Scott and Rand bring Annie along on this important reconnaissance mission when she honestly can do nothing but scream and hang on to the back of the cycle. I mean what's she gonna do if they fall into a Genesis Pit or something? Start ovulating?

Speaking of beasts that live in dark pits inside of us, I've never been big into dinosaurs. I don't understand what's so awesome about them, and I question their nerdcore cred. That is, geeks who are really into dinosaurs, and science-fiction that involves dinosaurs, just seems wrong to me. I mean, I understand that they were amazing creatures, but the problem is they really existed. I just can't geek out about that.
at October 07, 2009 2 comments:

Colonel Wolff in this one sounds kind of like he's being voiced by Charlton Heston. I know that's not the case, but wouldn't it be great if it was?
at October 07, 2009 No comments:

RAND: "I hope you know what you're doing, Lunk."
LUNK: "Hey, when did I ever know what I was doing?"

I love the tough-guy talk coming out of the animated non-racially-specific googly-eyed people.
at October 06, 2009 No comments:

whoops, i have to kiss you now

Another thing about this ep. Rook cons Rand into kissing her, to save face, or for some convoluted reason. Much like the scenes in Macross where Lisa and Rick snogged for "strategical" situations.

What is it with all the fake non-committal kissing? Is it because the original anime didn't want to show "real" kissing? (The actual couples in Robotech, notably, spend much more time staring deeply into each others' eyes [and blowing things up together] then actually kissing.) Or is it just for tease/fanservice, the titillating suggestiveness of kissing someone for pragmatic reasons, when both of you only sorta kinda want to. 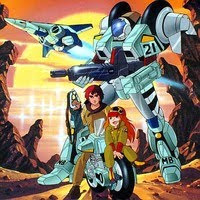 Oh there is some funny ass shit in this one where Annie's pestering Rook to eat some chicken (in her rapid-fire voice-actor-fitting-long-line-to-short-lip-movements-style): "Hey-Rook-it's-time-to-eat-better-hurry-up-or-there-won't-be-any-left-c'mon-doesn't-this-piece-of-meat-smell-good?" Then Rook swats it out of her hand, and the drumstick falls to the ground, and Annie whines, "Now it's all dirty!"

There's no real reason Annie has to say "Now it's all dirty!" Except to iterate that she never ever never stops talking. Which is hilarious. Great job, voice actor. ROTFLMAO.

Also of note: whenever Lancer takes a shower, his persona is totally feminine, up to and including daring/denying the guys (e.g. Rand, Lunk) to "peek" at him/her naked. Which is, I dunno. Kind of Advanced Topics in Gender Studies, if you know what I mean.
at October 05, 2009 No comments: