The Giants win the thing that comes after the pennant!

With apologies to Alan Moore and Dr. Manhattan:

It's 1985 and I'm a kid getting into baseball. The Giants are my Dad's team so I go with the Giants as opposed to the Athletics. And also, the DH is an unavenged crime against humanity and beauty. I cut clips out of the Chronicle and the Examiner recording their wins and paste them into an oversize sketching pad. The wins are only a few, we're in last place for most of the year. The radio jingle motto that year is, "Come on, Giants. Hang in there." On lazy summer afternoons I listen to Hank Greenwald call the games and the Giants lose them. There's something stirring in the way they TRY to score runs every day yet almost NEVER do. I'm a kid so I have no responsibilities towards nothing. I learn to describe me and my team as "we." We lose 100 games that year.

It's 1986 and Will Clark hits a home run in his first at bat in the major leagues and it goes for like a 100 miles.

It's 1988 and it seems evident that the A's are a lot better than the Giants.

It's 1989 and the A's and Giants are both in the World Series which oughtta be impossible, and then there's this real big earthquake which kinda throws everything in perspective.

It's 1993 and I'm graduating from high school and learning to be an artsy kid who doesn't follow sports and anyway it's the last year of the pure pennant race, before divisional play, so basically it's a big year for things being gone and lost forever.

It's 2000 and I realize that the Giants will never win a World Series because J.T. Snow comments about the aesthetic beauty of a loss to the Mets instead of being crushed and enflamed by losing, and I see that the Giants don't want it bad enough, possibly because of the Bay Area's sunny climate of civility and relativism and fine cheese, they don't have the killer instinct.

It's 2002 and I'm in a bar seeing Rich Aurilia hit a double to center field and it just kicks ass. Later I'm at work at the casino and we're up 6-1 on the Angels and about to win the World Series. I have to pay attention to my job for a while because some idiot is trying to gamble away the whole doughnut shop in front of me. When I look up at the TV again, we're losing. We lose to the Angels. We will never win, because you only get so many chances.

It's 2003 and my baseball heart is broken and anyway we're losing awkwardly to a Florida expansion team that goes on to win the championship over the Yankees and that is just foolishness.

Its 2005, 2006 and 2007 and I'm supposedly this grownup now, the internet has eaten my memory and exploded the world, and the only Giants news is of Barry Bonds' at-bats and his pursuit of the home run record, with no coverage or care about whether they win or lose. It feels like a particularly cynical and ridiculous time.

It's 2010 and I am just all over the place but I remember that once in a while even skinny Jose Uribe would hit a home run because given enough trials, anything can happen. Insanity is doing the same thing over and over again expecting a different result. Yet in spite of your insane expectation, sometimes a different result will happen. Jose Uribe passed away in 2006. It's October and I'm of the belief that Jose's ghost is hovering over his cousin Juan Uribe, much more the power hitter. Uribe hits it high. And he hits it deep.

We beat the Braves with deadeye pitching and like, three hits. We beat the Phillies because they're the best team in baseball. And we handled the Rangers (that is, Bush's team) with authority, because, despite our occasional wacky politics and obscure-foodie/cultural elitism, we just really like standing together and singing along to Journey songs. That are sometimes about Detroit.

I mean, who does that? GO GIANTS.

I wrote a couple pieces, continuing the series on California Casinos, at You Offend Me: "How To Win" and "Brilliant Things Said At The Bicycle Casino." In them is all the wisdom accumulated in my years on this Earth. I MEAN IT.
at May 21, 2010 1 comment: 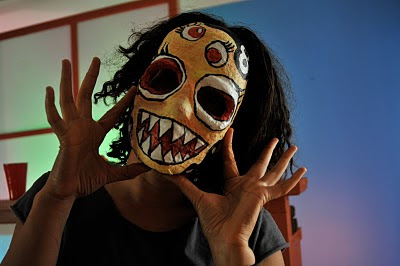 2. The crew we assembled could not be nicer, and yet they were also ruthlessly efficient.

3. The actors did amazing things. Despite losing 2 actors to schedule conflicts the day before day 1, the acting of the ensemble grew in warmth and immediacy with every day of the shoot.

4. I didn't learn as much technical jargon as I was hoping for on this shoot. Like for example I still have no idea what a joker is, and just figured out yesterday that it's a cinesaddle and not a cinecidal. I did learn the meaning of "Dutch Rudder" and what it is to take a Mother Daughter shot, but I was probably better off not knowing those things.

5. There were a few minor disasters, but nothing compared to the Homeland Security vs. Grip Truck thing. There was only one day when I really thought the whole show would fall apart....okay maybe one and a half days.

6. It's going to be a pretty funny movie. It will qualify, I believe, as "nerdcore."

7. Artistic satisfaction and completion is a better feeling than anything. Sex, food, love, the roller coaster, anything. Those 18 days were one of the best and hardest times I ever had.

We're at a tricky time for the human races. For one thing, we have a black president. On the other hand, people have become kind of racistly post-racist 'cause they are backlashing against how silly Political Correctness was, and the "minorities" themselves confused activism for being overly-sensitive. In fact in the age of Ipods and I-everything we've all become a little too sensitive; we've also become susceptible as never before to the powers of ad propaganda telling us what we like, what is cool, who is the hero. If market research tells us that a white-euro-male hero is necessary to make money from a movie or TV show, and money is the prime concern for the powerful bean-counters of all nationalities in this global recession, then that effectively ends the argument against having anything else (unless you are into poverty, or independently wealthy, or something like that) and the only question remaining is what ethnicity his hot girlfriend is gonna be to maximize audiences in Asia and the "urban market."

Anyway, in all that grey mess, after years of progress and regress, there is one thing for sure: there still ain't too many English-language movies with more than two Asians in speaking parts (unless it is INSERT EXAMPLE OF FILM THAT IS HEAVY ON MARTIAL ARTS, DOCTORS, NERDS, OR FETISHIZED GIRLS), and even precious fewer that have a bunch of Asians mixed up with (gasp!) peoples of other colors.

So, if you care about any of that, here's my indie film to support. This is the flipcam test trailer. Cheers mates.