I never saw this one completely 'cause my own VHS copy back in the day was skagged.

Scott and the real Robotech Army prep to attack Reflex Point. In an interesting coaching decision, Scott leaves Rand, Rook and Annie behind 'cause they're not in the regular military. For some reason, Lancer and Lunk are, although Lunk's major tactical function appears to be the driving of trucks. Anyway, this sets up a wonderful scene of Lancer saying farewell and giving Rook a goodbye kiss. He is a straight player, that Lancer.

Rook and Rand join the battle anyway, so we get some cool Cyclone action vs. the Invid enforcers. Mid-battle, Rand tells Rook "he's fond of her" and she gets all wide-eyed.

LESSON LEARNED FROM ROBOTECH #84.3: fighting aliens at the end of the world offers many hookup opportunities.

So they finally get into Reflex Point, and the Regis (queen of the Invid) gives her big "I-am-the-Alpha-and-Omega-puny-humans-pay-attention-to-me-because-of-my-reverby-voice-and-also-I-am-emanating-energy-tendrils-constantly-so-you-know-I-am-kind-of-the-Big-Deal-around-here" cult-leader/pyramid-marketing-pitch monologue. Booooooring. All-powerful alien monarchs, they all talk the same.

Getting a little verklempt here. One episode left.
at November 16, 2009 No comments: 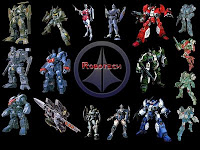 Man, so this is gonna be over in 3 episodes. It's the last month before graduation. For my next trick am considering "V: The TV series" from 1985. Any ideas, as if anyone is listening?

Or I could just start blogging seriously about the movie I'm working on.

LUNK: "I can't believe you're making a movie of this!" The group chastises Sue Graham for standing by and running a camera during a battle. So quaint. These days if someone records a massacre without intervening, they're a hero.

That's kind of all that happens. There's a bit of cool business with Alpha-Beta separation and Rand dogfighting an Invid simulagent who looks like Legolas, and Sue Graham's flowing raven hair as she dies, and the reveal of Marlene's green-bloodedness. But mainly the whole thing just makes me wish I had a life (or a transforming motorycle.)
at November 06, 2009 1 comment: 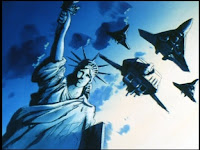 This is absolutely one of the best episodes. Why? Because it's about people fighting for their right to PERFORM AT CARNEGIE HALL IN A MUSICAL DANCE NUMBER.

Anyone who is a fan of "Escape From New York" or Marvel Comics can appreciate the fantasy of a post-apocalyptic Manhattan; with close-quarters street battles fought tooth and nail between renegade heroes, alien shock troopers, a transvestite cabaret singer, and his gay dancer friends in leotards.

SERA: "It's that Earth Rebel who causes the disturbance within me!" As Michael Jackson says, it's all for the love, L-O-V-E.

Seriously, the fight between the Battloids and Shock Troopers in what might be the West Village is pretty sick. This is our first glimpse of the Beta Fighter's Battloid mode, which eliminates a key weakness of the humanoid form by having a missile launcher instead of a head.

In the end, the musical theater geeks win. It is implied that the show, alien occupation force notwithstanding, must go on.
at November 04, 2009 2 comments:

This one's sort of a lame tangent. Dusty Ayres? Captain Harlock is calling, and wants his gruff back.

***Actually this episode has one good part in which Rook and Rand are surrounded by Invid and they have the brilliant idea to "use our combined cluster rockets!" Why, yes, let's! After all, we're so used to firing off all of the Alpha's 226 little rockets to destroy 2 or 3 targets, why not for once we apply a little military efficiency and shoot off all of both Red and Green Alpha's 44 thousand missiles in One Gigantic Wad to eliminate an overwhelming horde of targets?

Sorry, I get a little excited during the cluster rockets scenes. It's something about the knee-missiles....waaah.
at November 03, 2009 1 comment: